Raiders are a unique kind of enemy. They attack settlements at night during a Raid Event. Raiders will have a random appearance wearing the higher tier armor and weapons the further the player progresses in the game. The settlers scale equally in stats as the raiders throughout the game.

Raids will take place occasionally after dusk. The cooldown on raids is a minimum of 2 hours, and starts with a maximum of 3 hours. Each raid increase the maximum by 1 hour, while each settlement boss quest, reduce it by 1 hour (never below 3 hours). Raiders will come from a specific direction, and they will spawn in and prepare for a short time before attacking. You can also see the raiders on the island map, so you will know where to defend.

Raiders will come in waves, each wave will consist of several small groups. The raiders will move towards the center of the settlement and the houses occupied by the settlers. Settlers usually stay in their rooms at night, but they will come out to fight the raiders as they approach their rooms. When a settler loses approximately half their health, they will retreat to their room to heal. 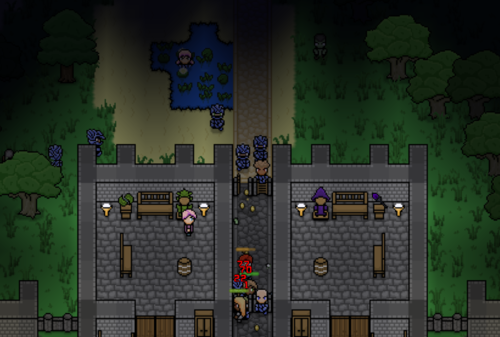 If there is no other settler to distract the raiders, they will go to the nearest occupied room, break in the door and attack the settler inside until either they or the settler are dead. If a settler is killed, the raiders will move on toward the center of the settlement attacking any settler they find on their way. The more settlers you have, the more they will try to kill before leaving. If you have less than 7, they will only kill 1. If you have less than 12, they will kill 2 and at less than 17, they will kill 3 and so on up to a maximum of 5 killed settlers.

Raider attacks will continue until a message pops up that the raiders are leaving. They will flee to the edge of the zone and disappear, even ones fighting at the time.

If a settler dies during a raid, they do not respawn, but the same type has a very high chance to arrive soon after to be recruited.

Among many techniques, traps can be used in defending against raids, such as a Kill Maze For Raiders.