Settlements are Player made Villages. To start one, craft a Settlement Flag and place it down. Settlers can be recruited to join your settlement at other villages, or when you run into them in the world.

For settlers to join, you need to build houses. Settlers will join if you meet their requirements, and your settlement has less then 2 homeless Settlers, a homeless.
A house or room needs to be at least 4 tiles inside, a completed valid floor, a door and it must have a light source. In order for more settlers to move in under one settlement, an empty room has to have a bed. Some settlers have special requirements, like the Alchemist needs an Alchemist Table, and the Blacksmith needs an Anvil. It will say what they need when you try to move them into a house or room.

Settlers will have jobs in a settlement, which they perform around their house. The Settlement Flag location does not matter. 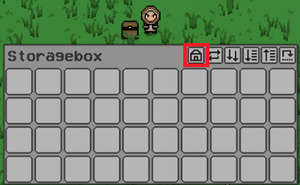 To allow settlers to use Storageboxes and Chests, Right-Click the chest to open its inventory, then press the Settlement Button at the top. In the next screen, you can choose what items are allowed inside this chest. 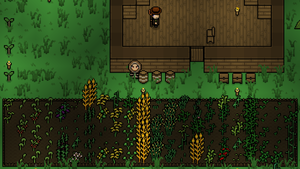 Example of a Farm

The Farmer will farm Farmland around his house

The Farmer will fertilize Farmland that is within assigned Fertilize Zone around his house.

Go to Inventory (default=E) and press Settlement, Then Work, and choose Assign Fertilize Zone, then select the land you want to use.
The farmer will fertilize Farmland with planted seeds.
Fertilized Farmland speeds up growth of the crop.
Be sure the Farmer has access to a storage with Fertilizer. 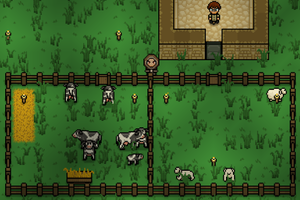 Example of Fenced in Animals. The Cows will reproduce automatically, the Sheep won't.

The Animal Keeper will take care of animals around his house.

You will want your animals to be fenced in. Make some Fences, (ex. Wood Fence) and a Gate (Ex. Wood Fence Gate), and place them near the Animal Keepers house. Go to Inventory (default=E) and press Settlement, Then Work, and choose Assign Husbandry Zone, Then select your entire fenced area.

Next, buy a Rope from the Farmer or Traveling Merchant. Use the rope (Right Mouse button) on a wild Sheep or Cow, so it will follow you around. Right click on doors to keep them open. Lead the Animal into the fenced of area, and Right-Click to let it go.

If you bring at least 2 Cows or 2 Sheep, you can start breeding them. Do this either by giving them Wheat by hand, or via a Feeding Trough. A Feeding Trough is a container, that can be filled with Wheat and, if placed inside the fenced off area, will keep the animals fed and multiplying. If the area gets too crowded with animals, they will stop feeding from the trough and you'll need to either kill some or enlarge the fenced in area for them to start eating again. You can also set a maximum number of animals to keep in a husbandry zone by left clicking the highlighted zone. Excess animals will be slaughtered.

A Forestry zone can be assigned, for all Settlers to work in.
Go to Inventory (default=E) and press Settlement, Then Work, and choose Assign Forestry Zone, then select the land you want to use.
Next, plant some Saplings in the selected area, and be sure to place a chest nearby with Sapplings and Logs allowed.

When you set Recipes in Crafting Stations, Settlers will use available Items from Chests, to craft these recipes.
To set up a recipe, Right-Click a Workstation, and press the Settlement Button at the top.
In the next screen, press Add Recipe, and choose an item. To change the amount of items the settlers will craft, use the '+' and '-' in the itemline.
For other settings, like 'Do until X' or Do Forever', press the arrows button in front of the '-', and choose the option.
Holding shift and left clicking the '+' or '-' will move the number up or down by 10.

Settlement quests are quests given by the Elder settler. The quests follow the intended boss progression by first giving a regular quest to obtain an item from the next area, and then the quest to defeat the boss from that area. After completing the first area quest, you can always take more regular quests from a pool of all the areas you have completed quests in. The defeat boss quests give unique items as a reward, only obtainable from settlement quests. After the first time obtaining these unique items, they will start to be sold by the Traveling Merchant. Other quests give various rewards including rare ones like trinkets for the Toolbox and some unique costumes.

Quests from the same settlement are shared between all players that accept it. If one player completes it, other players will not be able to. The quest progression is unique to the settlement, meaning if you start a new settlement, you will have to start from the first quest tiers.

Happy settlers give better shop prices and take shorter work breaks.
There are 3 different ways to increase settler happiness. Having more than 100% happiness on a settler has no effect.

Having settlers eat better quality food is the easiest way to increase their happiness.
Settlers will only eat from chests assigned as settlement storage.

Living in a larger room increases a settlers happiness.

A rooms furniture score is based on the different types and how much furniture is in their room.
Examples of furniture types are: Chairs, Tables, Bed, Clock, Dresser, Flower, Candelabra etc.
Having more than 1 of one type of furniture has diminishing returns on the score.