Modding is the act of modifying, adding or removing content and features. Mods are created by the community, and shared through the Steam Workshop. They can be anything like adding more items and monsters, adding a new language, changing the textures in the game, adding new features, tweaking balance and much more.

Modders usually share their mods on the Steam Workshop. If you subscribe to a mod, the next time you launch the game a mods button will appear in the main menu. In this menu you can see the mods you have installed, change their load order, enable or disable them.

For dedicated servers to have mods, they must find and download the mod jar file. Many modders give links to where they can be downloaded on the mods Workshop page. Once you have the jar file, you have to put it inside a mods folder, depending on your system. If the folder does not exist on your system, you can create one yourself.

Necesse mods are created using the Java programming language. This place is not for you to learn Java, there are plenty of tutorials and resources on that out on the internet already.

Mods are packaged inside a jar file for the game to load during runtime. When modding, it's a good idea to have a decompiler (included in most IDEs). The source code won't be released yet (if ever), and many topics are not explained thoroughly yet. This means you often have to rely on decompiling classes and checking out how they are done in the core game.

The Official Discord Server has a channel dedicated to modding where you can ask questions, get help and request new modding features for the game and all other things Necesse modding.

Getting started and example project[edit]

To get started on modding, there is an official example project you can download, found on Github. It includes basic stuff like adding items, tiles, objects, monsters, recipes and more. It also includes build tools using Gradle to easily compile and structure your mod so that it can be read and loaded by the game, as well as development tools like loading your in-development mod, so that you can upload it to the Steam Workshop when complete.

If you have downloaded the example project, it can be loaded using your IDE and almost everything will already be set up for you. All you have to do is configure your build.gradle file with the correct mod info and the games install directory. Once done, it will prompt you to refresh the project.

Running and testing your mod[edit]

Image of where the gradle task can be found inside Intellij

To run your in-development mod, you will need to launch the game with -mod <folder path with your mod jar> option. This is already done for you if you are using the example project and run the runClient Gradle task. It can be found in the far-right toolbar inside Intellij (see image). Using this launch option will also allow you to upload your mod to Workshop once it is complete.

To test multiplayer, you can run one client with the runClient Gradle task, and another with the runDevClient Gradle task. One client should host the game, while the other should connect through the multiplayer menu. The hosted game should show up as a LAN server, or you can manually connect to it by using "localhost" as IP the address. The dev client will load into the game with a different authentication ID, allowing you to have 2 clients inside the same server.

It's also important to test the dedicated server since it does not have access to the resources the clients load on startup. To do this, run the runServer Gradle task, and run your regular client at the same time. Same as above, you should then be able to see the game inside the multiplayer menu as a LAN server, or you can manually connect to it by using "localhost" as IP the address.

Note: If you are using the example mod, you can skip this section as it is generated for you using the values you set inside the build.gradle file.

Every mod must have a mod.info file in their jars top path. The file structure is custom, but very similar to JSON. It's used troughout the games saved files. The file must have these fields:

Important notes about your mod.info file:

Example of a mod.info file:

Your mod needs an entry class. This is where the game loads your mod from and calls initialization methods. Create a class with the @ModEntry annotation to tell the game that's where your mod starts.

Important notes about your @ModEntry class:

Example for your mod entry class:

The game will look for specific methods within your @ModEntry class. Here's a description of them:

This method is called before loading of the core game. It should only be used on rare occasions. If you are not sure about it, don't use it.

This method is called after the core game has been loaded. Here you should register your own tiles, objects, items, mobs and so on.

The general order in which you should register your mod objects to avoid issues are (not forced):

This method is called only on the client and should load any extra resources your mod uses that the game doesn't automatically load.

The resources will be loaded from a resource folder. You can read more about this in a later section.

If you have a texture at resources/texture.png you can load it using GameTexture.fromFile("texture")

All sound (.ogg) files need to be placed in resources/sound folder and can be loaded using

For information on music paths to override music, look at MusicRegistry.registerCore

This method is called after the game is done loading all its core, mods and resources.

This is where you should register recipes, create or modify loot tables and spawn tables and register chat commands.

This methodd is called when the game closes. If you have anything that needs to be disposed, that the game doesn't already dispose on it's own, do it here.

If you are using the example project, a lot of this is already done for you. Simply run the buildModJar Gradle task, and it will generate the jar inside the ./build/jar folder.

For the game to recognize your jar, it has to follow a specific structure: 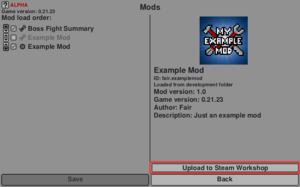 Image of the upload button when mod is loaded from development

To upload your mod to the Steam workshop, a few conditions have to be met:

When all of these conditions are met, a button to upload your mod will appear when you select it inside the main menu mods screen. Click this and it will walk you through uploading to workshop. When you first upload, the mod will be hidden and only you will be able to see it. You can change this when you are ready to launch on your mods workshop page.

Localization files are needed to give your tiles, objects, items, mobs and other things names. The files should be placed inside the resources/locale folder, and be named the same as the language they are using. Example: en.lang for the english translation.

You can also see how the localization file is structured inside the example mod project.

The file is divided up into categories and keys. If your item has the localization item.exampleitem, it means that it's under the item category and has the key exampleitem.

The language file is read line by line in order. If one line is a category change, all the next keys will be under that category. Here's an example:

Translations can have replacements that can be done in runtime. To add a replacement key in your translation, add a <key> somewhere. The key can be anything like <name>, <number> etc. Example: mobhealth=Mob health: <health>

Using a translation inside the game[edit]

If you don't want to use a translation, you can also just give it a static string with new StaticMessage(string...)

For the game to load your resources, they have to placed inside a resources folder in your mod jar.

Using this, it is also possible to overwrite existing ingame textures by placing another texture at the exact same path as the core game ones. In the Discord server, there is a wiki channel with a pinned message where the core textures can be downloaded and used for modding and this wiki.

This also means that your resource files can get overwritten by other mods, so try and keep your file names unique.

Resource loading happens automatically for any files in the resources folder. But some things will look at specific subfolders to load their textures. Examples:

Until more documentation gets migrated and added to this wiki, you can use the old documentation here: Published Google docs file